Aeternus (Nor)" …And The Seventh His Soul Detesteth 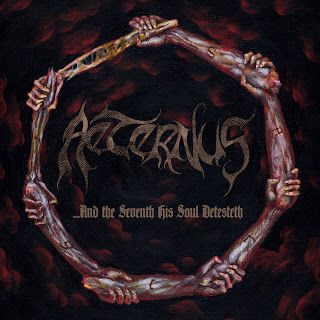 Over 6 years has gone since Aeternus previous album 'Hexaeon' an album that got a lot of time in my player.

Now they've (come)back with their 7th studio album and with an almost totally new line up except for the main main Ares.,and even though line up changes this still sounds totally like Aeternus..
A limited edition will be available with their first Ep 'Dark Sorcery' from 1995.

That being said it sounds like some new blood in the band wasn't a bad idea at all,as I can hear they have some new approaches and ways of playing on this album,but it's still easy to hear what band I'm listening to.
It's dark,brutal & blended with nicely done acoustic parts which has become a trademark when speaking of this band.

The first thing I notice while listening to "…And The Seventh His Soul Detesteth"
is probably that they have left room for more atmospheric & melodic arrangements and have developed even further musically and it works very well with the more melodic or should I say at times melancholic? elements they so nicely blend into their well known realm of darkness!

The distorted guitars they use is just adorable,on all albums that is!
Some brilliant guitars solo's does not drag down either.

Aeternus really shows with this long awaited album that they are still on top of of the league on what they do best,dark metal like no one else does it and I can assure you that both old & new fans won't be disappointed as I think this album is overall better and more solid than 'Heaxaeon' and possibly one of their best albums so far!

So far 2013 has been a hell of a year for all kinds of metal with a lot of great releases and this one is no exception. Let's hope it continues this way and may the shitty ones fade away.

“…And The Seventh His Soul Detesteth” was recorded and mixed by Bjørnar E. Nilsen (Vulture Industries, Black Hole Generator) at Conclave & Earshot Studios in Bergen by a renewed Aeternus line up boosting new energy. Bolstering the ranks of the new Aeternus are Ares’s accomplices; Phobos (Malsain, Gravdal) on drums and guitarist Specter (Gravdal, Tortorum).This limited edition version of the album is released with the classic “Dark Sorcery” EP from 1995 as a bonus disc.

TRACKLIST1: There Will Be None2: ...And The Seventh His Soul Detesteth3: Spurcitias4: Ruin And Resurrect5: The Confusion Of Tounges6: Hubris7: Reap What You Saw8: Saligia9: The Hand That Severs The Bonds Of Creation10: The Spirit Of Illumination“Dark Sorcery” (Bonus)1. Black Dust2. Victory3. Raven and Blood4. Nordlys (Instrumental)Band website: www.facebook.com/AeternusofficialLabel website: www.darkessencerecords.no
Posted By Gravarson