The latest arrival was the for me totally unknown band Strynn with their debut album 'Decadence' after releasing a split with the progressive black metal outfit Galvauder anno 2012. 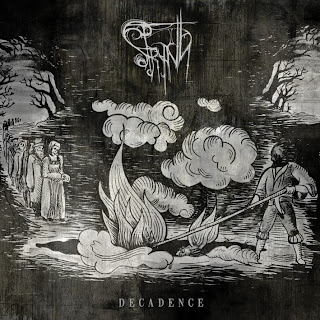 I usually don't talk to much about album covers ,but when I received this and looked at the cover I found it very appealing in many ways,so simple,obscure and old-schoolish in many ways and of course let's get to the main point ...It fits the the atmosphere this album creates while listening.

I must confess that when the first track started spinning I knew this was worth a listen,the only thing I was excited about was the vocal,as the first track were instrumental but luckily they did not ruin the overall impression so far,and the hate fact here has to be that I actually had no idea whatsoever that a female was responsible for the vocals! I read in the cover that there was a female involve but thought it was some additional opera like vocals and what a relief it was to find out I was wrong. Cause that would destroy this album totally!

Musically this band plays pretty forward black metal 90's style and according to the cover it's supposed to invoke hatred,pain and similar feelings,as for me this is just a good album at least considering it's their debut.
I have listened through the album twice now and could easily put it on one more time... 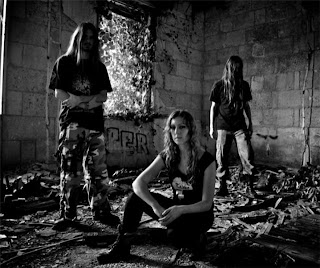 If you look for something 'new' my advice is simply to fuck off as this is not original in any way but they score some points ,due to the fact that they have created a very good album that truly awakens the good old black metal feeling with simple but very catchy riffs and all in all a very enjoyable piece of art.
Cold,harsh,at times brutal and well executed black metal from the darkest depths of France.